Bitcoin: The Emperor Is as Naked as a Jaybird

Home » Bitcoin: The Emperor Is as Naked as a Jaybird

Bitcoin: The Emperor Is as Naked as a Jaybird

­­­­­It was back in 2005, right about the time the real estate market was starting to go into bubble mode.

Strippers in Las Vegas with low credit scores were getting approved for mortgages and buying houses for no money down. One of them reportedly owned six homes!

Then, Wall Street started bundling these subprime mortgages together. And somehow, they got them rated triple A, the highest credit rating, and sold them to investors.

When I asked how that was possible, analysts showed me mathematical models, research papers and a long list of investment banks that were buying them.

In my book, it was just a lot of smoke. No one had any real explanation.

I simply shrugged and walked away. I knew it was only a matter of time before the housing market would go belly up. And it finally did over the next three years, causing the greatest financial crisis since the Great Depression.

Once again, I have no idea what bitcoin is or how to value it.

I’ve asked people who’ve been following and trading cryptos for years to explain bitcoin to me. And none of them really can.

Even in a recent Saturday Night Live skit, Tesla founder Elon Musk was asked to explain what cryptos were.

He couldn’t come up with a straight answer. In the end, the conclusion was that it was just a “hustle” — a scam, another way to part investors with their money.

And I guarantee you, dollars to donuts, in the next five years … we’re going to look back and wonder how so many people could be so clueless. Just like the housing market, the crypto market will have its day of reckoning.

What This Means for You

Over the past two months, bitcoin has plunged close to 40%. Most of that fall happened in just a few days last month… 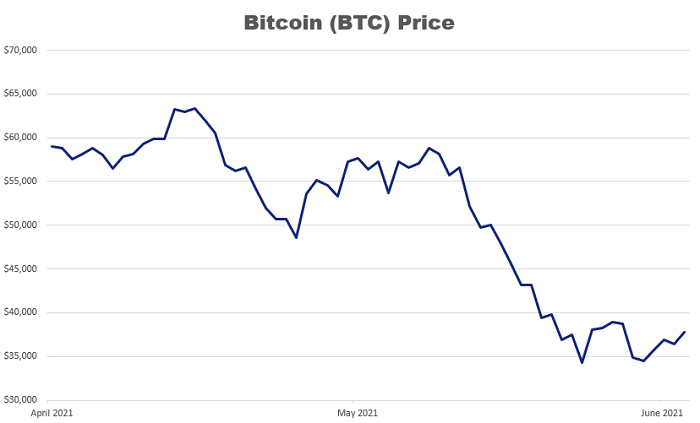 It’s close to three months to the day since I called the top of bitcoin back in 2017. And ever since, I’ve told my readers to hold on to their wallets and avoid it at all costs.

There’s a huge difference between investing and speculating. And not knowing the difference will be detrimental to your financial health.

That’s why I have two very simple questions I ask before I invest my money into anything.

Asking them saved me a boatload of money. I only lost money when I didn’t ask them.

The first is: “Can I understand it?”

If I can, I then ask the second question: “Can I value it?”

Now, ask yourself: Do you really understand bitcoin and cryptos?

I’m talking about how they work … how they’re “mined” … and the fundamental economic factors influencing their prices.

So far, I haven’t met anyone that can give me a simple, intelligent answer in two sentences or less. But if you can, then ask yourself the second question. (And I’d also greatly appreciate it if you emailed us at AmericanInvestor@BanyanHill.com with your two sentences.)

Can you value it? Are you able to intelligently come up with a fundamental valuation to determine if the market price is over or undervalued? If you can’t, you have no business trading cryptos.

This Is What You SHOULD Be Doing

I’ve found a much easier, stress-free way to make money. And it doesn’t involve putting electricity into a computer and making crypto money.

You just buy shares of great businesses run by rock-star CEOs when they’re trading at bargain prices. Then, you sit back and let them work for you as their stock prices move higher over the long term.

You didn’t have to be much of a genius to buy Microsoft or Apple years ago. At the time, they were the 800-pound gorillas in their industries.

It doesn’t get much simpler than that.

So, the next time you get the urge to invest your hard-earned money, ask yourself if you can understand it.

If you can, ask yourself if you can value it. If you can, then you’re starting out on the right foot. If you did your homework, you should be making a nice return pretty soon.

But if you can’t, stop right there and hold on to your wallet.

Because at the end of the day: “Fools rush in where angels fear to tread.” By following my two questions, you’ll become much richer being the angel.

P.S. Every month, I spend days poring over financial statements to identify the best companies out there that you can understand easily. They’re the Microsofts and Apples of today — the kinds of stocks that can build your nest egg without speculation.

I share these companies with members of my Alpha Investor research service. And I want to make sure you get a chance to access them, too. So, find out how you can become an Alpha Investor today right here.