And it wasn’t the only one. AMC Entertainment shares soared 769% and BlackBerry’s saw gains of 229%.

These stocks have since been on the front page of The Wall Street Journal for the past few days. The frenzied buying by retail traders from online forums like Reddit are front of the mind for many investors now.

But as Mark Twain once said: “History doesn’t repeat itself, but it often rhymes.”

Believe it or not, this is nothing new on Wall Street.

Take the story of the Northern Pacific Railroad in 1901. Railroad titans James Hill and E.H. Harriman were battling it out to gain control of it.

As the two bought more and more shares, Northern Pacific’s stock price kept going higher and higher. In just three days, the share price soared from $150 to as much as $1,000.

But there were many short sellers of Northern Pacific out there. And suddenly, they were forced to scramble. In order to cover their positions, they had to sell off other assets. Many stocks and bonds plunged. So, this price hike wasn’t just threatening to ruin short sellers, but Wall Street itself, too.

Eventually, cooler heads prevailed and a truce was called. Short sellers were allowed to settle at $150 per share. And calm returned to Wall Street.

The point is, what’s happening right now with stocks like GameStop, AMC and BlackBerry is very similar. And to hear my full analysis of the situation, be sure to check out my interview with Joshua Philipp of Crossroads on YouTube right here.

But today, I want to focus on the three things you should remember to make sure you don’t get caught flat-footed by this investor euphoria…

The End Won’t Be Pretty

Since January 11, GameStop shares have soared over 1,200%. On a daily basis, its share price has been gaining 50% to 100% or more as retail day traders keep buying. 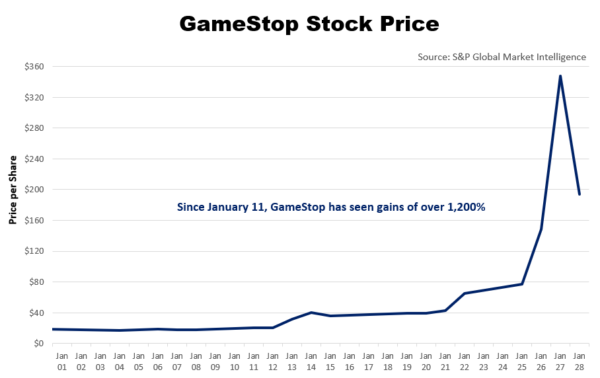 That’s why it’s all over the news. And you might even be hearing some of your family members, friends or neighbors talking about how they’ve bought the stock and made gains of 10x in just a week.

But no matter how enticing it may seem, I want you to ignore all of it. Because this is nothing more than a game that people are playing — and a dangerous one at that.

This is not investing. It’s speculating. Think about it…

GameStop is a mall retailer selling video games. But nowadays, most video games are downloaded, not bought at stores. According to data firm Statista, in 2009, digital games accounted for only 20% of all U.S. computer and video game sales. In 2018, that figure jumped to 83%.

So, GameStop’s business isn’t a good one. It’s a dying brick-and-mortar chain that’s losing money. That begs the question: Is the company really worth the $10 billion that these frenzied buyers have boosted its value to?

Of course not. The stock isn’t trading based on the value of the company. It’s trading on momentum. And when price becomes detached from value … the end is never pretty.

I don’t know when it’ll end, but rest assured, it will end. At some point, buyers will start selling, short sellers will be able to buy back shares and the stock price will fall back to earth.

And that’s why — despite all the crazy gains and news headlines — if you’re even thinking about getting on this train, I want you to stop and listen…

Forget the Market Frenzy … Here’s What to Focus on Instead

We aren’t day traders. We’re investors. That means we have a different approach to the markets. And it’s why I want you to remember these three things right now.

No. 1: Shorting a stock is extremely risky.

However, if you short a stock at $10 and it goes to $100, you lose $90 (assuming you have ample funds to hold the position). And there’s no limit on how high the stock can go. That means you’re looking at limited gains, but unlimited losses. It’s a terrible risk-reward ratio.

No. 2: Markets can be irrational for much longer than your net worth can handle.

If you’re shorting a stock and it continues to rise, you can be out many times your investment. You’ll have to put up money with your broker to support the position. Or, your broker will cover the position for you at whatever price they can and you’ll be on the hook for the balance.

Either way, you’re likely losing oodles of money. Look at hedge fund Melvin Capital, which shorted GameStop and has been crushed by the rising stock prices. It needed an infusion of nearly $2.7 billion from two other hedge funds to stay afloat.

You never want to put yourself in that kind of position where you’re risking what you have for something that you don’t need. That’s just plain dumb.

So, why do it the hard way? I like making money when it’s easy and I don’t have to worry. And that means sticking to what’s proven to work in the long run…

Buy shares of businesses that are in industries with strong tailwinds, run by rock-star CEOs and selling at bargain prices. It’s pretty simple.

If you think like a business owner and not like a trader, you don’t have to worry much about the day-to-day market swings or what stocks are making front-page news.

So, if you’re worried about missing out on this trading frenzy, remember this…

These are just insane price movements. It has nothing to do with investing. And it’s a good definition of noise. Avoid saying: “What’s the worst that can happen?” Because there are plenty of times when the worst does happen.

Wait until the feeling passes. Take a walk. Hopefully, the fresh air will help you change your mind.

And if you’re not a member of my Alpha Investor service yet, you’ll want to consider joining us by going right here. Rather than focusing on the market frenzy, you could focus on the several Alpha stocks I’ve recommended recently that are still trading below their buy-up-to prices right now. They’ll give you an opportunity to buy shares at attractive prices if you become a subscriber today.

In fact, I just released my latest recommendation. It’s a billion-dollar U.K.-based retailer that’s surviving and thriving through the pandemic by adapting to shoppers’ needs. And you won’t want to miss out on your chance to profit on it.