Ignore the Noise: Americans Are the World’s Greatest Givers

Home » Ignore the Noise: Americans Are the World’s Greatest Givers

Ignore the Noise: Americans Are the World’s Greatest Givers

Don’t be fooled by all the ranting and raving on the news.

Everyday Americans are still holding on to the American spirit. You might not see it from the talking heads, but you and I know it’s there.

Americans still believe in hard work. We know to never give up. And we rebuild after times of hardship.

Most of all, we give back. We show our generosity to one another through billions of dollars of charitable giving every year.

Just last year, Americans donated nearly $450 billion to various causes. It’s one of the most generous years on record.

In fact, it’s a huge part of what makes this country the greatest that’s ever existed. Regardless of political differences — which have been around since the beginning — we’re the most generous nation in the world by far… 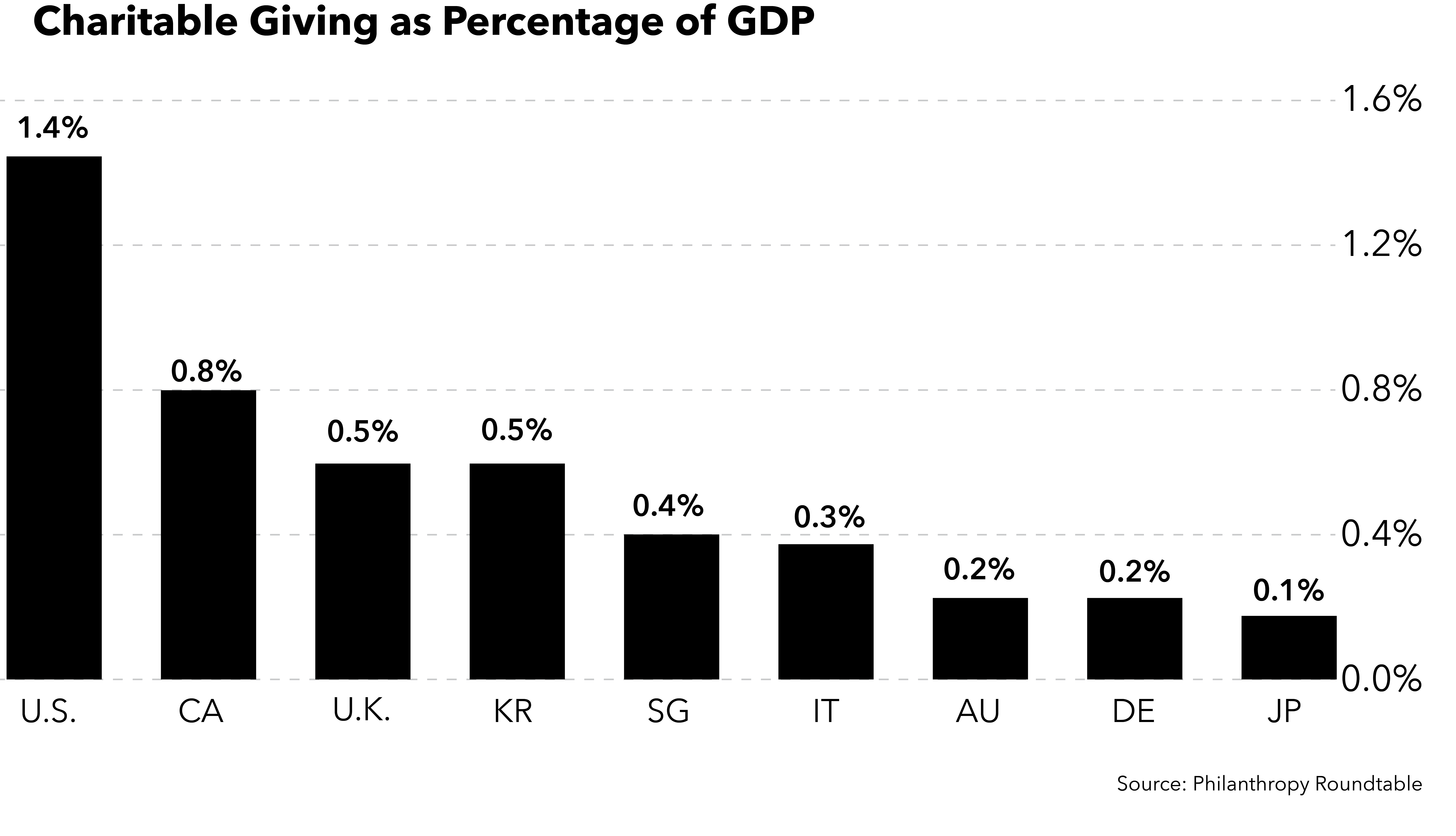 And it’s not just billionaires or the ultra-rich who are stepping up to help those who are less fortunate. Many people whose names you never hear of in the mainstream media give millions, too…

When he passed away from cancer in 2015, he left $13 million to his alma mater, St. Thomas More High School in Wisconsin.

But Leonard wasn’t a local celebrity or sports star. He was a regular Main Street American with a normal life just like you.

Leonard worked as a cook in the Navy, and then as a meat cutter, before he opened a corner grocery store. He loved ballroom dancing so much that he saved up to open his own dance studio.

Leonard was also careful when it came to spending. He’d buy shoes on sale, even if they didn’t fit him perfectly, just to save a buck. And he never went on vacations.

Still, you don’t make $13 million just by buying shoes on sale and not taking any days off. So, how did he do it?

He got his fair share of America’s prosperity the same way any Main Street American still can. And that’s what I want to show you today…

You see, my team and I are dedicated to showing you strategies you can use to achieve your dreams.

And the one Leonard used isn’t new. He’s not the only one to use it, either.

He made his millions through America’s greatest wealth creator: the stock market.

Leonard didn’t trade in and out of stocks based on the trends of the day. He invested over the long term in companies he was familiar with and understood.

After that, he just held on. He let time and his money do all the work. That’s how he made his fortune.

I love guys like Leonard. He followed one simple strategy: Buy great businesses at bargain prices, then sit and wait.

This is the same strategy behind my Alpha Investor service. It’s one I’ve developed using my 37 years of experience in the market, after seeing all the ups and downs it can throw our way.

Like Leonard, we invest in businesses we understand … ones in huge industries with strong tail winds behind them. Then, we take our earnings and use them to make our own American dreams come true. And as we showed you, we even use some of that to help others.

One thing we definitely don’t do is get caught up in day-to-day price swings or follow Wall Street’s herd mentality. Very few people get rich by watching CNBC and trading every few minutes on Robinhood.

I want you to make your own millions. I want you to embrace America’s greatest wealth creator. And the best way to do that is by investing in great companies when their stocks trade at bargain prices.

Again, giving back is one of the things that makes America such a great country. And this is my way of doing exactly that.

Nothing makes me happier than knowing I can help everyday Americans like you get a leg up on Wall Street to improve your lives.

That’s one reason I created the American Prosperity Campaign. I wanted to make sure that every American has the chance to secure their financial future.

I kicked it off with a summit showing you exactly how to spot the opportunities that people like Leonard embraced. I promise you, people who watch this have the chance to make in months what it takes some people a lifetime to make.

You don’t want to miss it.