If you’re following every wiggle and jiggle in the stock market, I have news for you…

Not only are you wasting your time, you’re missing out on how the real money is made.

Daily market gyrations are nothing but noise. And if you focus on the noise, you lose sight of the long game.

Long-term thinking is how successful investors make big money in the stock market. They don’t get distracted by noise. In fact, they only care about one thing: swinging at the fat pitch.

Just what is a fat pitch?

It’s a pitch that’s located right where the hitter expects it to be. Great baseball players such as Ted Williams would only ever swing at fat pitches.

The rest of the time, he rested the bat on his shoulder.

By only swinging at fat pitches, Williams landed himself in the Baseball Hall of Fame — and is still considered the greatest hitter of all time.

Investors have a lot to learn from Williams.

Instead of “swinging” and making stock trades on every company that comes your way, you should only invest when you see a fat pitch.

In other words, only buy stocks when they’re trading at a price that gives you the highest probability of making money.

The rest of the time, it’s best not to do anything.

Right now, the stock market is in panic mode over coronavirus fears. And stocks are trading at prices way below the underlying worth of their businesses.

In fact, the market’s offering investors a few fat pitches right now — but if it falls further, we’ll see even more.

That’s why smart investors are buying mispriced stocks instead of hiding under their desks.

And so should you.

I’ll show you why in today’s video and will also break down the four things you need to remember when the market’s in a frenzy.

This coronavirus sell-off is handing investors a rare opportunity to buy great companies at bargain prices.

Names I’ve had on my watch list and wanted to buy — but were previously too expensive — are now getting tossed into the bargain bin.

That’s why now is the absolute best time to become a reader of my Alpha Investor Report newsletter.

Every month, I show my readers how to get into an Alpha company that’s participating in a fast-growing market and trading at a bargain price.

Finding great companies to invest in isn’t the hard part — finding them at bargain prices is.

But thanks to this market downturn, my job has gotten a little bit easier. In fact, to quote the famous Warren Buffett, I feel “like an oversexed guy in a whorehouse.”

So, if you’d like to join my readers and learn how to swing for these new fat pitches — now’s your chance.

But you’ll need to hurry.

My Wall Street connections seem to think that this sell-off is reaching its ninth inning, so there’s no telling how long stocks will continue to trade at major discounts.

That’s why you need to check out my special presentation today to decide if Alpha Investor Report is right for you.

This market could turn at any moment as this coronavirus situation changes — so now’s the time to swing for the fences.

Are Stocks on Sale?

How should you deal with the panic on Wall Street right now, specifically when prices plunge and it seems like the world’s about to end?

In the past couple of weeks, we’ve had some of those days where the market moved over 1,000 points, both up and down. We had one day where it fell close to 7% — over 2,000 points. We’ve had interest rates plunge, the oil market got decimated… It looks like the end is near.

I suggest you take a step back and absorb some perspective on how to look at the market and, most specifically, how to deal with panic on Wall Street.

Now, making money in the stock market is pretty simple. Wall Street likes to dress it up with a whole bunch of complexities — with alphas and betas and industries and sectors…

Put all that aside. In a nutshell, it’s pretty simple.

To make money in the stock market, you basically buy financially sound businesses when they’re trading at bargain prices. That’s it.

Investing is one of the few businesses where you only need to make offensive moves, meaning you don’t have to do something every day. You don’t have to invest or, for that matter, do anything.

It’s called swinging at only the fat pitches. 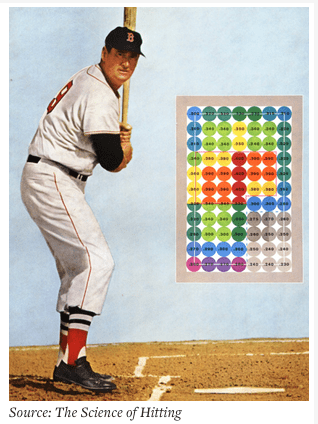 And that comes from the guy I’ve had on my wall for the past 20-something years: Ted Williams.

Ted Williams was one of the greatest baseball players of all time. He had a lifetime batting average of 344. And he was the last player to hit over 400. He batted 406 in 1941. That is a record they say will never be broken.

But his lifetime average of 344, his 1,839 RBIs, his 521 career homeruns and his more than 2,000 walks only tell part of the story… They only tell you a tidbit of what made Williams so fearsome at the plate.

But what really made him so fearsome at the plate was what opposing pitchers used to say: He had the greatest pair of eyes they ever saw. They never saw him swing at a bad pitch. That’s it. He was extremely disciplined.

Take a look at this picture, which appears in Cooperstown — the Hall of Fame. This is Ted Williams and the way he looked at the strike zone.

So he waited for pitches to go right in what he called his “strike zone” — the red and orange area. Because he knew if he swung at pitches in that area, he was not only going to get a hit, but he was going to be able to hit consistently, and hit for average.

Now, I keep a picture of Ted Williams on my office wall to remind me to only swing when I’m thrown the fat pitch. In other words, to only make an investment when everything lines up.

I don’t have to make an investment every day, every week or every month. Only when all the conditions are present for me to have the highest success. The rest of the time, I just keep the bat on my shoulder. I don’t need to do anything.

You see, stock prices jump all over the place. Wall Street is preoccupied with the next quarter instead of the next decade. They look on how an event like coronavirus is going to affect stocks and companies over the next quarter, or the next two quarters. 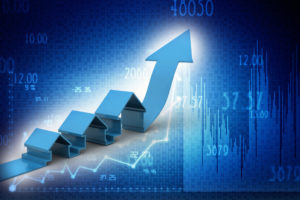 Did anything change in American business that’s going to affect these stocks over the next five or 10 years?

And the answer is: No.

So that puts me in a different head. I don’t need to panic. Instead, I use rational logic. I sit and I figure out what price I want to pay.

The key is that I stay patient and wait for my price. I only buy when I’m getting more value than I pay.

So to put it all together for you in a very simple formula, the key to making money is this…

No. 2: Keep cool under all conditions. Remember, the markets not there to get you. It’s not a personal game. No one’s out to get you. Realize that you have to stay calm and keep cool when markets plunge, and not get excited when they overextend themselves to the upside.

That’s like if you opened up a sushi restaurant, business didn’t go well the first week and you said, “Let’s open a pizza place!” It’s ridiculous.

But in terms of investing, people do this every day. They switch their game plan depending on how it did yesterday. And that’s not the way it works.

If you have a good process, the results will eventually come out.

No. 4: Shut off your computer. Shut it off. You don’t need to be involved every day. Don’t open your brokerage statement. Think about this…

If you want a house or an apartment or a condo, do you have a ticker outside telling you what the price is every second of the day? You more or less have an idea of what your house or piece of real estate is worth. It doesn’t need to have a ticker.

Take the same attitude with stocks. Just because they trade all day and have tickers flashing doesn’t mean you have to take advantage of that and go crazy every time it moves this way or that way.

If you know the valuation of the business, you really don’t have to pay too much attention to what the stock’s doing. You only take advantage of the stock market when it’s in your favor.

And lastly, the key in thinking about stocks is to always realize that panic will mess you up in a big way.

I happen to see this in the U.S. Army Survival Manual of all places. And I’m going to quote: 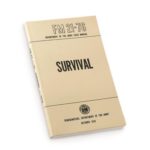 The greatest enemies in combat, survival and invasion situations are fear and panic. If  uncontrolled, they can destroy your ability to make intelligent decisions. They may cause you to react to your feelings and imagination rather than your situation. They can drain your energy and thereby cause other negative emotions.

Fear and panic will destroy any ability you have to make wise and intelligent decisions. They are also the greatest obstacles to making money over the long term.

Unless you learn to control your fear and panic, unless you realize that the game is played when you want and on your terms … you’re going to be like a one-legged man in an ass-kicking contest.

You’re going to be at a severe disadvantage. And the people who are going to make the money are those that have patience, swing only at the fat pitch and play only when the game’s in their favor.